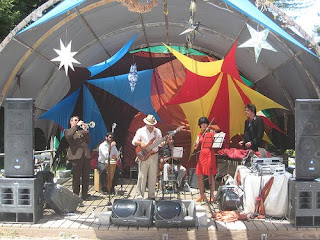 I know, I really should use this opportunity for something other than promoting my band, but what can you do? File this under noise if you'd like -

Eggplant Casino is taking over the Madrone Lounge for an epic evening of Hardcore Caribbean Rope Burn Music. We're playing two or three sets (depending on how the spirit moves us) to include all your favorite Afro-Latin-Calypso-Gypsy-Cabaret tunes as well as some hypnotic instrumentals, unexpected covers, brand-new compositions and even a few works-in-progress. Normally a full night of music, mischief and traditional Yetchnian folk dancing like this would cost you hundreds if not thousands of dollars, but for you, our most esteemed friends, we're offering the whole show for the low, low cost of $7. Please join us.

Posted by sighafstrom at 6:43 PM No comments:
Email ThisBlogThis!Share to TwitterShare to FacebookShare to Pinterest
Labels: eggplant casino, music, noise

You know it's a Wednesday night in San Francisco when you're sitting cross-legged in a late-Edwardian-style sporting costume on the driveway of the parking lot where the French animated film the Triplets of Bellville was just shown to an audience of hundreds of bicyclist enthusiasts, projected on the blank space between windows on a white apartment building wall, and you're eating piping hot, locally grown organic zucchini, poblano pepper and cilantro vegan soup out of a compostable bowl with a compostable spoon while David Bowie's Heroes is playing loud through the speakers mounted on a bike ridden by a man wearing a metallic turquoise raver shirt who happens to be one of the West-Coasts preeminent Flash Mob organizers, and the air is sweet with clove smoke and chai and whatever that smell is coming from the reappropriated taco truck that now serves "French take-away", including frogs and snails, and as you watch your fellow bicycle enthusiasts collect their bikes from the bike parking attendants, you wonder who else is there in a costume and who just dresses like that.

Posted by sighafstrom at 12:46 AM 3 comments:
Email ThisBlogThis!Share to TwitterShare to FacebookShare to Pinterest
Newer Posts Older Posts Home
Subscribe to: Posts (Atom)