Me no feel good.

For the past few weeks, I've felt cold symptoms for a few days, and then felt fine for a few days, in a repeating cycle. I've been very diligent about keeping my thoughts on health, on not succumbing to illness; on Christmas Eve morning, I woke up feeling absolutely awful, but refused to be sick. I said to myself, out loud, "Perfect health is my truth, no matter how I feel. I am a divine expression of the One Life, and that Life knows no illness, therefore I know no illness", etc. Within an hour, I felt fine.

Its now two days later, and I'm back in bed, feeling sick. I want to refuse this condition, but I feel like I just don't have the energy. My fuel has run dry.

Some people discredit the New Thought Movement for being a touchy-feely, spineless, non-philosophical philosophy, but I disagree entirely. To know that my thoughts create my reality, my life and all the conditions that come with it - this is a very tall order! When I'm sick, I can't make bargains or barter with any God, except for the One that is Me. I have to own up to my own experience, and know that I can be miserable or I can be joyous, I can be healthy - even if my condition appears otherwise - or I can be sick - again, even if contrary to appearances.

I have a friend who, by appearances, may seem to have had cancer, but everyday she has lived and continues to live in the consciousness of perfect health. The outward condition has no power over her joy. I have many other friends who are perfectly healthy by any medical diagnosis, but who's stresses keep them in a constant state of fatigue and discomfort. They are more sick than she is, because she has a ceaseless commitment to consciousness. She decides.

Not a small decision. I'm not having the energy today to decided to feel healthy in the midst of this cold. I want to go to the video store and get more cinematic crack, but the walk feels so far, and I feel so weak. (I just finished the Phantom Menace and Contempt - maybe that's why I feel bad. But that's another topic all together.)

So, what do I decide? There is not the option of not deciding. I have the cold, or I have the health. It seems, at this point, either decision is going to take it all out of me. Sick, or well? No bargaining, I decide.
Posted by sighafstrom at 1:51 PM No comments:
Email ThisBlogThis!Share to TwitterShare to FacebookShare to Pinterest
Labels: cancer, christmas eve, cold, contempt, effort, fuel, illness, life, mind, new thought, phantom menace, religious sceince, touchy-feely

This is the stuff right here. I’m sitting on my bed with a bowl of popcorn, doing some writing and listening to the best ever radio station, KCSM. I put it on expecting jazz but instead am being treated to a show about Hanukkah-related klezmer music written by Woody Gruthrie. Random, but fun.

Kevin’s in the kitchen making more popcorn, and I can hear the lid lifting off the pot as the popcorn overflows. He just stated watching 16 Candles. Damn, I might have to ditch the awesome scene here in my room, with the klezmer and the popcorn, and join him on the couch; 16 Candles is truly one of the finest pieces of cinema in the history of film. Do no challenge me on this – I know what I’m talking about.

“You need four inches of bod and great birthday.”
Posted by sighafstrom at 7:25 PM No comments:
Email ThisBlogThis!Share to TwitterShare to FacebookShare to Pinterest

Hip-hip-hooray for a neat and tidy, laid-back piano trio! That there is some of the most intimate, personal music around. I'm talking about piano, bass, drums. Its like getting my hand held for the first time by a cute boy - nothing heavy, just sweet. Piano trios get into me right at the deep, soft spot I have for chamber music. I like music one has to be quiet to hear.

As its the Christmas time, I'm listening to a favorite Christmas album and favorite piano trio, the Vince Guaraldi Trio's A Charlie Brown Christmas. There is a psalm about dwelling in the secret places of God, and a Charlie Brown Christmas is on the soundtrack to these secret places. It perfectly captures a few distinct sounds: being warm and safe indoors on a quiet, dark gray day; romping in the bright snow, safe and warm and bundled against the cold; and of course, there's the exuberance of the Peanuts theme song, Linus and Lucy, which sounds like a childhood of freedom and simplicity the wise-beyond-their-years Peanut gang never actually seemed to live.

(I guess should mention I think Peanuts is a work of genius, but that's a whole other topic entirely.)
Posted by sighafstrom at 2:31 PM No comments:
Email ThisBlogThis!Share to TwitterShare to FacebookShare to Pinterest

everyone's a winner at the Eggplant Casino

Did I tell you? Last week, a week ago tonight, the Eggplant Casino had a show at the Hemlock Tavern. Shoot howdy was it a good time! Can you not tell by the photo; I mean, whatever! Look at those guys - Todd Grady, trumpet-player extraordinaire on the left, and the multi-talented Dave Malloy on the right - having the time of their lives. And those guys have thrilling lives, too, let me tell you. I played viola (a little) and sang (a lot), and danced around and gestured at the audience and that kind of thing. You know.

This would be the part where I post a link to our music, but that doesn't exist yet. Your best alternative is just to come see us at our next show. Which also doesn't exist yet, but I'll let you know when it does. Yay, us!

ps. on Dave's site, you can hear the tunes from Clown Bible, a musical which he wrote and we both were in. Goooood times.

Okay, one more photo (from before the show - Thanks for the great shots, Toby!) - 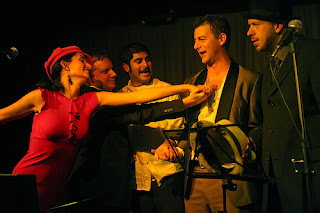 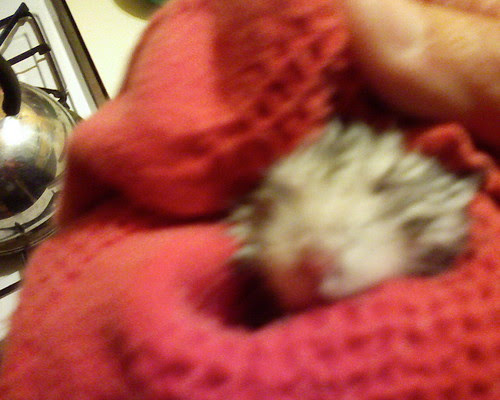 This guy, Mr. Face, was one hell of a hamster. He wasn't friendly, in fact, he was rather hostile, but he sure was cute. And fit, too; he ran in the wheel eight to ten hours every night (not an exaggeration). He was a movie star of sorts, back when he was still called Billy, featured for a few crucial moments in Evolution: the Musical. That's how he came to live with me, in fact. Someone needed to adopt him after the shoot, and although he wouldn't stop biting me, I just couldn't resist. His favorite foods were dried soba noodles, pop corn, mac and cheese, and seaweed. He liked blueberries and necterines, too, but hated anything green and leafy (except the seaweed).

Mr. Face died tonight, suddenly and mysteriously, after an illness that couldn't have lasted more than seven hours - when I left the house this morning, he was running in the wheel, which actually, is kind of odd because he was nocturnal. Regardless, I'm raising a sad glass to the memory of Mr. Face tonight, trusting that he's running endless rotations in the big hamster wheel in the sky. I love you, Mr. Face.

Posted by sighafstrom at 7:53 PM 2 comments:
Email ThisBlogThis!Share to TwitterShare to FacebookShare to Pinterest

Pianist Brad Mehldau. What a cat! At first his songs seem like nice, smooth piano jazz, but then they start to turn wild and go free, and then come back together neatly and finish like nothing ever happened. I'd heard him a few times on the only radio station I can even tolerate, KCSM. Then Sanjay, percussionist for the Eggplant Casino, played one of Mehldau's Radiohead covers - Everything In It's Right Place - for us in the car after rehearsal, and I've been pretty much hooked ever since.

Here are three songs for you to hear, including another Radiohead re-do.
Posted by sighafstrom at 10:43 AM No comments:
Email ThisBlogThis!Share to TwitterShare to FacebookShare to Pinterest
Labels: brad mehldau, eggplant casino, intolerable and tolerable radio, jazz, kcsm, piano, radiohead, riding in cars

Its winter, its dark, its cold, and my natural instinct to watch movies is on. Forgive me for breaking the brevity rule, but I love talking about this stuff!

Several weeks ago, I saw the Darjeeling Limited. It has everything one expects from a Wes Anderson film - an absurdly dysfunctional family, absurdity and silliness in general, an unconventional and forbidden romance, death and loss, sloooow motion, a crazy-good soundtrack full of 60's psych-pop, the usual cast of actors, and that wonderful, obsessive visual lushness that boldly humps the line between sublimity and madness. And as with Anderson's other films, I'm sure it'll take repeated viewings to really understand. I'm still trying to get my head around Angelica Houston's scenes, for example. All the same, an excellent flick from one of my favorite film makers.

After a few unsuccessful attempts to rent the Prestige, it finally happened. I've been psyched for this one for a while, and why not: you got Christopher Nolan directing Christian Bale and Hugh Jackman, plus David Bowie as Nicola Tesla. Yes! Christopher Nolan is indeed the master of the non-linear narrative. The story follows no straight time line what so ever, and yet holds together without a hitch. I love how he does that stuff. All the same, one of the two big twists at the end felt forced, absurd, and rather ruined my suspension of disbelief. So, not the utter stroke of brilliance I was hoping for, but still completely enjoyable, and worth it for the Bowie. Oh, and Andy Serkus is in it, too, as Tesla's sidekick - gotta love that guy.

Beowulf! 3-D! Imax! It was like being in a ginormous video game. I've never read the classic epic, but know the basic chain of events. The film actually tells an almost feminist revision of the story, and that I find satisfying. This, though, is not a reason to see it. Go see it for the crazy visual effects, the 3-D glasses, the monsters, the swords, the viking dudes in helmets, the gore, the violence, the strategically placed candlesticks hiding Beowulf's full-frontal animated penis, and a floating, naked Angelina Jolie coated in gold. What they can't do with computers these days. Not deep, but very fun.

Tonight I watched another film I'd been wanting to see for a while, the Talented Mr. Ripley. The cast of this film is totally golden, a dream team of actors. Matt Damon is wonderfully subtle and complex, and always a winner, heart throb Jude Law actually pulls off an American accent in this one (ever seen I Heart Huckabees? My god, he can't keep the same accent for more than a sentence!), Gwyneth Paltrow is perfectly Grace Kelly-like - bold, strong and feminine, Cate Blanchett is irresistibly charming as always, and Philip Seymour Hoffman is delightfully slimy and unlikable. This film is not for the faint of heart, a psychological thriller on par with Frenzy or the brilliant the Machinist - painful to watch because its so damn good. The story is fucked up and suspenseful, the violence is brief and nasty, and the ending is horrific. I squirmed a lot and loved it.
Posted by sighafstrom at 8:59 AM 1 comment:
Email ThisBlogThis!Share to TwitterShare to FacebookShare to Pinterest
Newer Posts Older Posts Home
Subscribe to: Posts (Atom)