How To Dress For The Grocery Store In Six Easy Steps

Most mornings, getting dressed is not much of a process. Although I'm not a morning person and typically am in a state of deep confusion while getting dressed, I still usually somehow manage to put clothes on correctly the first try.

Occasionally, though, there's a more extended, trial and error process typically involving periods of tucking in a shirt then pulling it back out, switching garments inside out, upside down, and/or backwards, experimenting with multiple belts, and the inevitable tying of some belt thing around my head. If you see me wearing a head scarf, there's a 70% chance I'd tried wearing the scarf as a belt first.

Monday morning was one of those mornings. Well, ok, it wasn't actually the morning, it was afternoon. I spent the real morning in yoga pants and a sweatshirt, and didn't get dressed until I realized, after several imploring visits to the fridge, that really, truly, I had nothing to eat, nothing was going to spontaneously materialize no matter how many times I looked, and that yes, like it or not, I would have to go to the grocery store.

As I was putting away laundry that morning (while wearing said yoga pants), I was inspired by this shirt, a hand-me-down gift from a friend that's a great color and feels light and breezy on, but is surprisingly difficult to wear. It's carnation red with these faded purple leopardy spots, and it struck me I'd like to see it with the red, pink, and purple chevron-striped skirt I got from a thrift store. Spots and stripes! Right?

I got the belt from a clothing exchange, and although I put in on regularly, it never makes it past this stage. It's never left the room even. I just don't understand belts. Other people wear them just fine. It's just a strip of material around the waist. Pants even have loops for them. And yet, I don't know. Every time I put one on, it seems, like, off.

But what about if I tucked the shirt in and wore a belt. And what if the belt was this awesome old scarf I pinched from the Killing My Lobster costume department?

It was getting there. I was reminded a bit of Dolce & Gabbana's vintage Sicilian-inspired spring 2013 ready-to-wear collection , which was a fantastic move in the right direction, but it still felt a little uptight and looked a little loose for my mood. To tighten up the shape and loosen the feel, I opened the shirt's top and bottom buttons, tied the bottom, rolled up the sleeves, pulled up the skirt up past my natural waist, and there it was.

With Dolce & Gabbana in mind - and out of habit - I tied the scarf around my head, threw on some chunky old saint medals of my mom's, grabbed a basket and called it done. The basket is from one of those stores that sells samples, deadstock, damaged goods, etc., and the sandals were bought new at the mall. 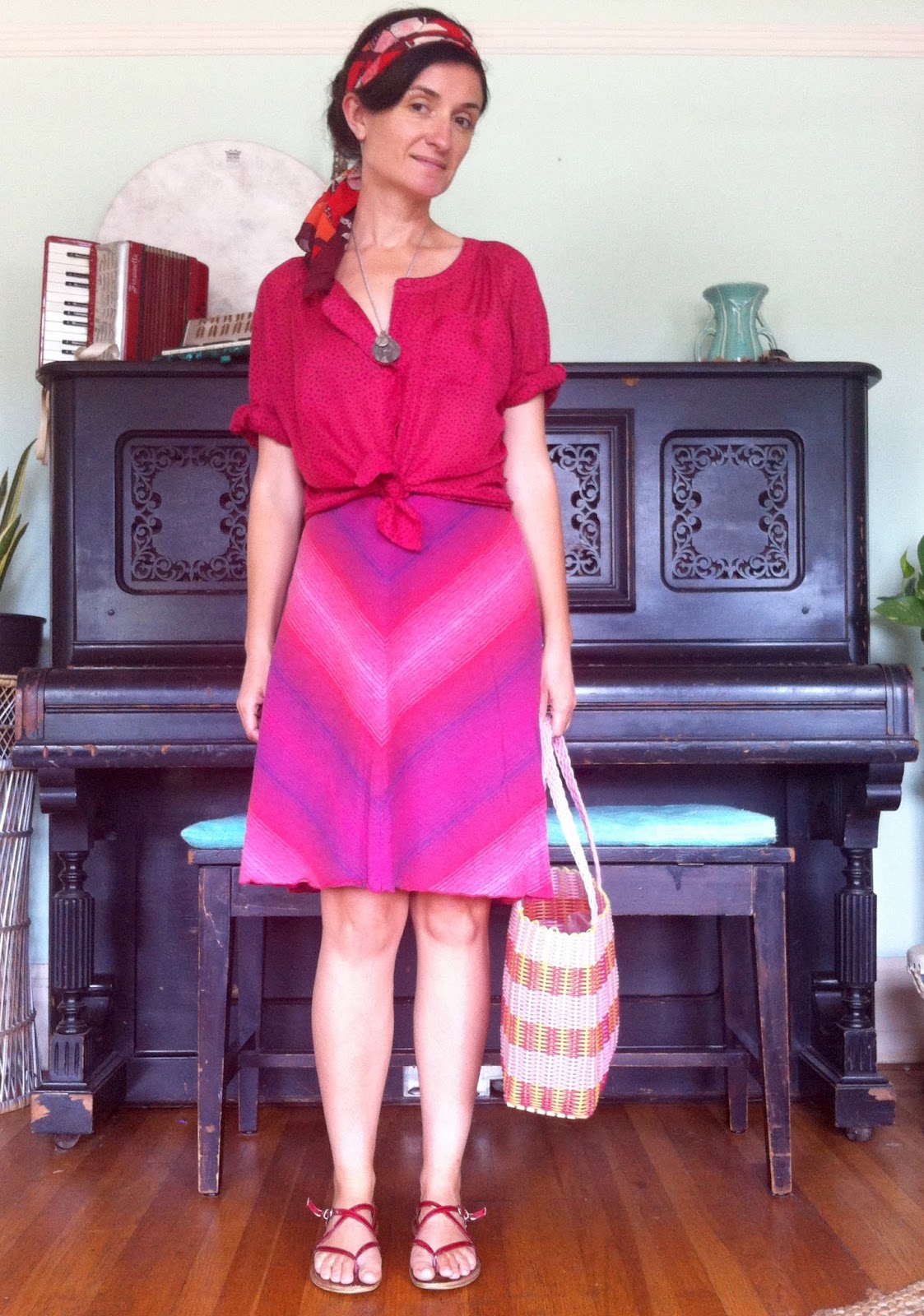