Do These Pants Look Strangely Familiar: The I'm Wearing Your Clothes Story

Ok, so: I have a lot of ideas. Bright ideas, dim ideas. Many are - rightfully - never acted upon. Some are never acted upon but actually are pretty sharp and do deserve to be tried at least. And then there are the many ideas that kind of get some action but not, like, really; that get started but not finished or significantly developed. Those poor little ideas.

I'm Wearing Your Clothes is one of them. Originally it was its own blog, albeit barely. Had I, you know, written things, it would have followed my New Years resolution to not buy any new clothes - that is to say, clothes not worn or owned by anyone before me. I could acquire new-to-me clothes, but only if they'd been previously owned by someone else. When I told other people about the project, they typically responded with interest and enthusiasm, and wanted to know if I was documenting it. Hence, I'm Wearing Your Clothes was hatched, grew feathers, then never left the nest.

The used clothes project, on the other hand, was so successful, I adopted it as permanent way of being, though I do buy some new pieces here and there.

Meanwhile, I was still taking the occasional pic for the maybe-someday-to-fly blog, writing a little here and there, and enjoying the hell out of other people's outfit selfies. Maybe it's because spring fever or maybe because the idea has finally digested a critical mass of worms (good grief, this metaphor), but I'm kicking it into the air with hopes it will soar. And also, it's not it's own thing anymore, it'll just be here and on Instagram 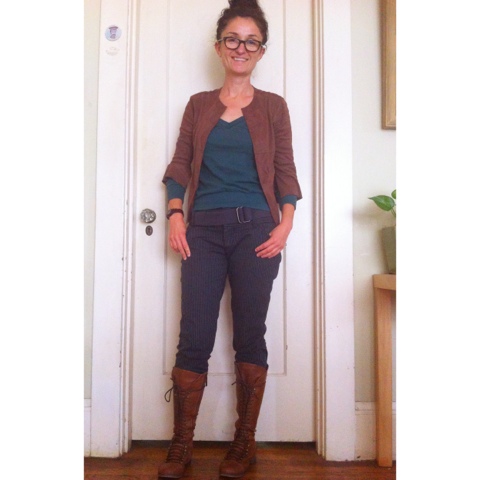 Ok, first of all, in real life the shirt is pine green, not teal, so there's that. Also, I think I got it from a free pile but I don't remember. Ultra suede jacket and striped pants are clothing swap. Cotton webbing belt is thrift shop. Boots are vegan and were bought new, so was the wooden watch, which is made from scraps of floorboards or some such.

Posted by sighafstrom at 4:11 PM
Email ThisBlogThis!Share to TwitterShare to FacebookShare to Pinterest
Labels: I'm Wearing Your Clothes