Penultimate Dispatch From The #UCC


Kayla and Lori's Ultimate Closet Challenge wrapped up over a week ago, but since I joined late, I went a couple few days extra. It wasn't all that much of a challenge, I admit. I have a lot of clothes, like a lot a lot, so I was never at a loss for something to put on.

I assumed going into this exercise I'd come out glowing with the wisdom that less is more, austerity is beautiful, and that I should consume less. None of that happened. I found joy digging into the unworn. Most the items I decided to get rid of I still at least like. I love my overstuffed walk-in closet, and anyway I don't even consume much to begin with.

But how can I have all these clothes if I don't consume much. The reason: I never get rid of anything. I am a clothing dam. I am clothing-retentive. I keep items for decades. About, oh, I'd say a year ago, I gave away a jacket I'd had but hadn't worn for many years, and I still think about that jacket and wonder if I'd wear it if I had it. I don't let go well. 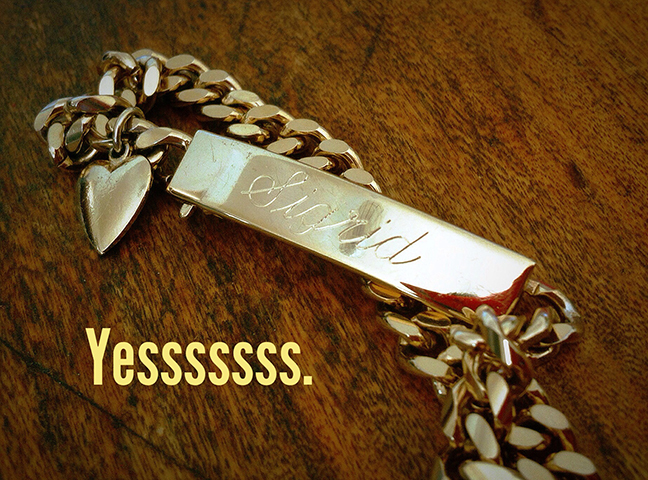 Sometimes it pays off. Take, for example this nameplate bracelet – not an article of clothing, sure, but an accessory, so it counts. My grandmother gave it to me when I was in my teens. At the time, I never wore gold, plus I hated being called by my full first name, Sigrid. Most pouty, belligerent teens like me would've thrown this thing right out, but I'm fatally sentimental – I could never get rid of a present from gramma – and I was aware, albeit abstractly, over time my tastes would change and it was possible someday I'd want to wear it.

The day arrived. It was about three weeks ago. I put the bracelet on and was like, yes, it is time. I've been wearing it pretty regularly since, so much so it's already getting scratched and dinged. I'm ready to let that happen, though. Gramma would want it that way. 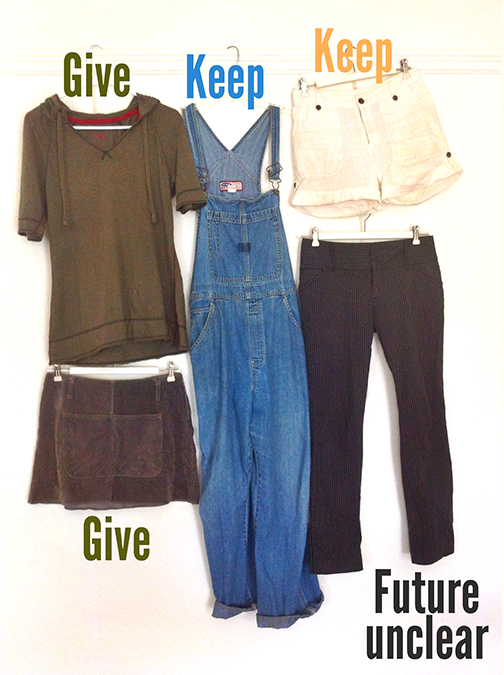 Surprisingly, these  overalls are not ancient and historical. I wore way more than my fair share of overalls in the 90s, wore them so much they disintegrated. After a long stretch of overall-free living, I picked these up from a friend's give-away pile. They've spent most their tenure with me in the closet, but I pulled them out for the UCC and wore them to repot a lemon tree, just like a legit farmer. I'm keeping them.

Also keeping the white shorts. When I found them in a give-away pile, they had an unattractive stain. I brought them home and was in the midst of soaking them in truly horrifying amounts of bleach, as I do, when I noticed the fiber content: organic cotton and hemp blend. "You're not organic anymore," I said. They're kind of grungy here because I'd just worn them camping. I mean, white shorts. How do you keep them clean other than horrifying bleachings? This is why I've only worn them once before this and am still skeptical going forward, but I'm going to try.

I'm confused about the grey and black striped pants. They're from a clothing exchange, and I really dig them a ton, but they're too big. They weren't before; it seems I've lost some girth. The last time I wore them was in the very first I'm Wearing Your Clothes, so now I'm sentimental about that, too. What to do. Take them in maybe? I don't know.

I am giving away the hoody-tshirt and corduroy pocket skirt. I like them both, I really do. I've had the skirt for ages, bought it new at one of those seconds/samples/damaged goods shops. I used to wear it a lot, and still appreciate it's apron-like qualities. I realized while wearing it to a client's, though, I'd be better off with an actual apron. Hm, maybe I'll turn it in to one. 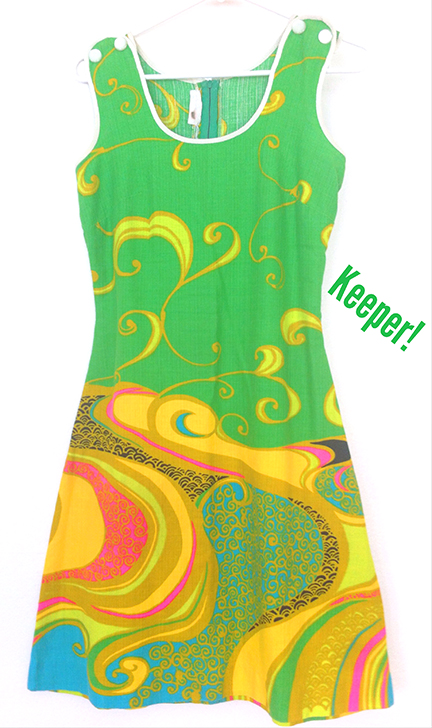 Speaking of alterations, I've decided that's all this vintage dress needs. I mean look at it, it's fantastic. It was a hand-me-down from a much bustier friend. This dress fits me like a glove, and when I put it on, I wonder, how did she ever fit her rack in this thing? Maybe that's why it's mine now. Anyway, it's great, fits great, always has, but I don't like the buttons on the shoulders or the boring white piping at the arm holes and neck. I'm keeping it, but those bits have got to go. 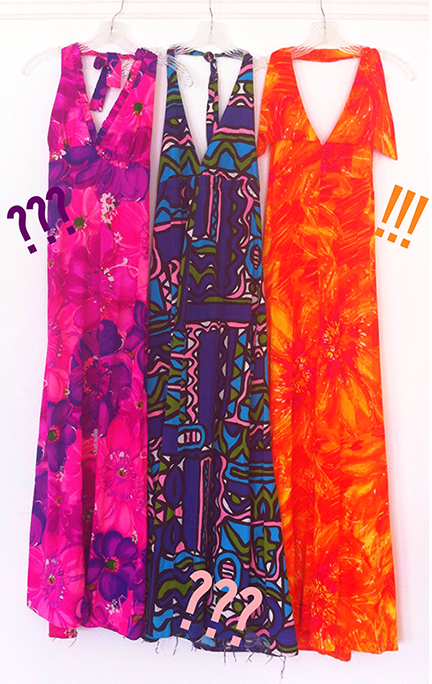 Now will ya take a look a these three bad asses. Ok, I pulled these out was when I was deeply convinced the UCC would teach me minimalism. I decided it's absurd for one woman to own three vintage floor length tropical halter dresses, especially since I don't wear them that often. The orange one – her name is Pele, after the Volcano Goddess – was made by my aunt in 1972 and is a family heirloom, so she's not going anywhere. The pink and purple one I bought at a thrift store in Hawaii, where it was also made – hell, I was probably the first person to bring it to the mainland, which is amazing, so I can't get rid of it. That leaves the middle one, which is homemade though I found it at a thrift shop. But look at that fabric; it's the greatest pattern in life! No way I can get rid of it. The pink one has the least compelling fabric, so maybe it should be the one to go.

But then maybe this whole foundation of reason is stupid. I mean, will my life or even just my closet be perceptibly transformed if I own two vintage floor length tropical halter dresses instead of three? Is that going to make the damnedest little difference? Unlikely. But if I apply that logic to all my clothes, I'll never get rid of anything. So I don't know about this. Pele is practically family, so she's staying, but what about the other two? Going, staying? Help me out here people.
Posted by sighafstrom at 9:20 AM
Email ThisBlogThis!Share to TwitterShare to FacebookShare to Pinterest